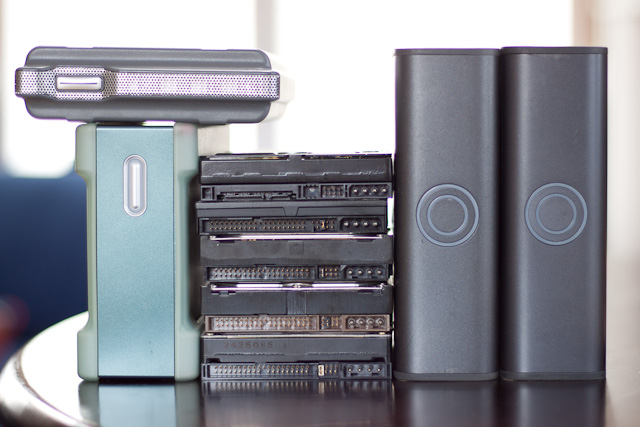 I’ve been debating about a lot of things to do with backing up my digital files from my various computers. I think my main problem is that I have a LOT of data to back up. Pictures and video take up a lot of my hard drive space (especially 1080p video from my Rebel T1i), so I really need an optimum way to manage all that, have access to all of it, and have it backed up in two places as well.

As far as I can tell, the best way to deal with it is to throw a LOT of money at it. Getting something like a Drobo that will house several hard drives and make sure that all data is recoverable if one drive fails seems like a good option….but an expensive option.

Purchasing a whole bunch of external hard drives and backing up everything twice seems like a more affordable option, but I can see myself backing things up on a semi-regular basis at first and then starting to slack off later as time goes on. So then I’ll have some backups of my old stuff, but still be in trouble if my laptop got stolen or damaged and the data on it was not recoverable.

There is some free Microsoft Software (called SyncToy) that can help with that kind of thing. It helps you sync your files to an external drive without having to do much work other than hooking it up and hitting start. It does cut down on the work, but it also requires diligence to do on a regular basis. I often lack diligence when it comes to things like that.

Another option is to build my own computer/server that can have a whole bunch of hard drives in it that are running in a RAID configuration so there is more than one copy of data at any given time. The problem with that is it takes a lot of time to setup and I still am not able to have an off-site copy of my data in case there is a flood or theft of the machine. That being said, I could probably hide the machine somewhere in the house and not have to worry too much about a thief finding it.

So, I’m not really sure what I should do going forward. I guess it’s a balance between cost and effort. Any suggestions for an optimum solution?